Opening speech: – We need trust between the generations

Welcome to the Bergen International Literary Festival for Non-Fiction and Fiction. I am standing here, at 18.30 on Wednesday 10 February 2021, in an empty auditorium in the Bergen House of Literature. I must admit that it hurts.

Our main commitment this year is the Literature Live Around the World collaboration project. There, presenters Siss Vik and Mona B Riise will be asking the 12 partners from 12 countries to choose one word from their language and explain why they’ve made that precise choice. I’d like to give my answer right now. My word is tillit – or trust.

Trust expresses the best of Norway. Trust at all levels, not least between the population and those we have chosen to govern us. That trust is being tested at present, both in Norway and internationally.

As festival director, I am wholly dependent on being trusted. And this year I have been shown trust on a scale which is out of this world – or, more accurately,  across the whole of this world – in the Literature Live Around the World project. I’m quite simply overwhelmed by all the festivals which have invested time, creativity, money and optimism in this challenging concept, where we have only been able to offer eagerness and enthusiasm in return. From 12 noon to 12 midnight on Friday 12 February, we will be visiting 12 countries to learn about their literature and culture. From Australia in the east to California in the west, we will wander the streets of Buenos Aires, gain insights into French feminism and infertility in Lagos, hear healing music from India and political poetry from Canada, and conclude with dub poetry on the beach in Jamaica.

The theme for this year’s festival is Generations. We need trust between the generations. Young people today need to feel they can rely on their elders to govern in the best way for their future. They need to trust that those who govern today are doing so with an eye to those coming after them – not just the ones getting the vote in the next election, but their children, and their children’s children.

Trust is a good word. It is a warm word. It takes a long time to grow. It’s like a tree – cutting it down doesn’t cost much effort.

I first came up with the theme for this year’s festival after reading an article which maintained that young people in the west might become the first generation in history which was worse off than its parents. What will that mean? How will it affect their lives? And what will it do to relations and trust between the generations.

We must talk together. The young must be listened to. They face tough times ahead, and they know it. The pandemic is increasing inequalities in the world, both internally within each country – as we’re also seeing in Norway – and between rich nations like Norway and poor ones. And those most affected are the young. The economic consequences will primarily be felt by young adults. They are hardest hit by unemployment. And they are suffering the most mentally from government-imposed isolation.

The questions we’re asking at LitFestBergen are: what does it mean to be a person in today’s world? And how does that find expression in the literature being written? In June 2020, we invited young people below the age of 30 from all over the world to write an essay about their generation. We received 550 entries from 90 countries. One has been written by 25-year-old Leen Alarbajo Alsayegh from Syria. She called her essay The map of us, and writes:

“This clingy war has been stalking us like our shadows, trying to bite off our hearts. Yet we are still here somehow. Just listen to my crazy heartbeat. Restless will I be, until violence melts in the arms of understanding.”

Listen to my crazy heartbeat! Leen loads up with literature and shoots at the reader. In her young and intense way, she writes about everyday life in war, and with literary will and a beating heart describes a bleak existence which no official document could evoke.

Despite dark times and fears for the future, many of the essays submitted to the competition depict a strong will to live and a strong will for literature – a will which recalled for me an August day in 1989, when I sat on a sun-warmed stone step outside the post office in Stokmarknes and opened the package which contained five copies of Vi er framtida – We are the future. Two of my poems were in print, and it would be hard to exaggerate the sense of joy this aroused in my 15-year-old heart. I hope that Leen and the 18 others who reached the long list have the same good feeling.

Imagine if we could help to strike the literary spark. Imagine if the young learn how literature can give you courage and strength, clear thinking and fire in your heart. We have expanded out LitFest UNG programme for young people this year, and will be letting them conduct the interviews with the authors. They should have been on stage here, of course, but we’ve found other solutions, and the first interviews were conducted virtually – with great success – today. They’ll continue both tomorrow and Friday.

LitFestBergen is where the unknown meet the known, where voices which have been suppressed in their homeland are heard, where new authors meet the established, and where everyone – young, old and middle-aged – opens their senses to words and language, acclaim and surprise, joy and despair. Absorb it and let it grow until we feel Leen’s wild young heart beating in each and everyone of us.

We have two young poets with us this evening, one Norwegian and one Iranian. Two very different voices which both show what poetry can do, how it can move us, get us to open up. Karoline Brændjord made her debut in 2020 with the poetry collection Jeg vil våkne til verden – I want to waken to the world. She has recently been nominated for both the Norwegian Critics Prize and the Tarjei Vesaas first-book award for this volume, which she will read from this evening. Fatemeh Ekhtesari was subjected to torture in Iran for her poetry and had to flee her homeland. She is now a Cities of Refuge author, resident in Lillehammer. She has published several books in Iran, but made her debut in Norwegian during 2020 with the poetry collection Vi overlever ikke – We do not survive – which she will read from this evening.

After these two poets, foreign minister Ine Eriksen Søreide will speak. We are very pleased she has chosen to address us this evening. We’re also very grateful for the support we have been given from the start by the City of Bergen, and mayor Marte Mjøs Persen will be our final speaker.

Before I hand over to others, however, I have a number of thanks to express. Many contributors make this festival possible. Let me start by thanking our financial supporters. A number of them, such as the City of Bergen, Vestland county council, the Norwegian Cultural Fund, Sparebanken Vest and Fritt Ord, have been involved from the beginning and have been invaluable, others have given bigger donations or are new this year, such as the Grieg Foundation, the Bergen Foundation, H Westfal Larsen and the Norwegian Non-Fiction Writers and Translators Association. The Sami Parliament, the Kavli Trust and the Savings Bank Foundation have also joined up just now. Their support makes it possible to stage the festival. My heartfelt thanks.

We also have many good and enthusiastic partners. I would make particular mention here of the Bergen Public Library, which we have collaborated with from the start and which was due this year to host two full family days. These have now had to be postponed until the autumn. We have collaborated with Norwegian PEN over these three years, as well as Prosalong and the Norwegian Non-Fiction Writers and Translators Association. This year, we have forged new partnerships with the Nordic Council Literature Prize, the Norwegian Association of Literary Translators, the Bergen Journalists Union, the University Museum, the Torborg Nedreaas Society and the Oslo House of Literature. Nor must I forget to mention 12 fantastic festivals or literature centres worldwide. In that connection, I must direct a particular thanks to Kulturoperatørene, which has been responsible for producing Literature Live Around the World.

Many, many thanks to my fantastically able colleagues at the Bergen House of Literature and LitFestBergen. We’re talking here about showing maximum trust in each other – by which I mean trust that everyone will do far more than could be expected.

Finally, I would like to thank the authors. What patience, what a positive attitude, what an enthusiastic gang you have been. That’s the reason I can stand here now and welcome everyone to the third LitFestBergen – despite the almost impossible conditions. One of the authors who should have been here is Mary Ailonieida Sombán Mari. She has also created the fantastic picture behind me, which was first produced for the Bergen International Festival and is a blessing of Bergen’s mountains.

I wish you all heartily welcome, our dear virtual audience. Let us hope that this will be the only opening speech I have to make without you being present.

We will now meet Karoline Brændjord and then Fatemeh Ekhtesari, before Ine Eriksen Søreide takes the stage and is followed finally by Marte Mjøs Persen.

Thank you for your attention. 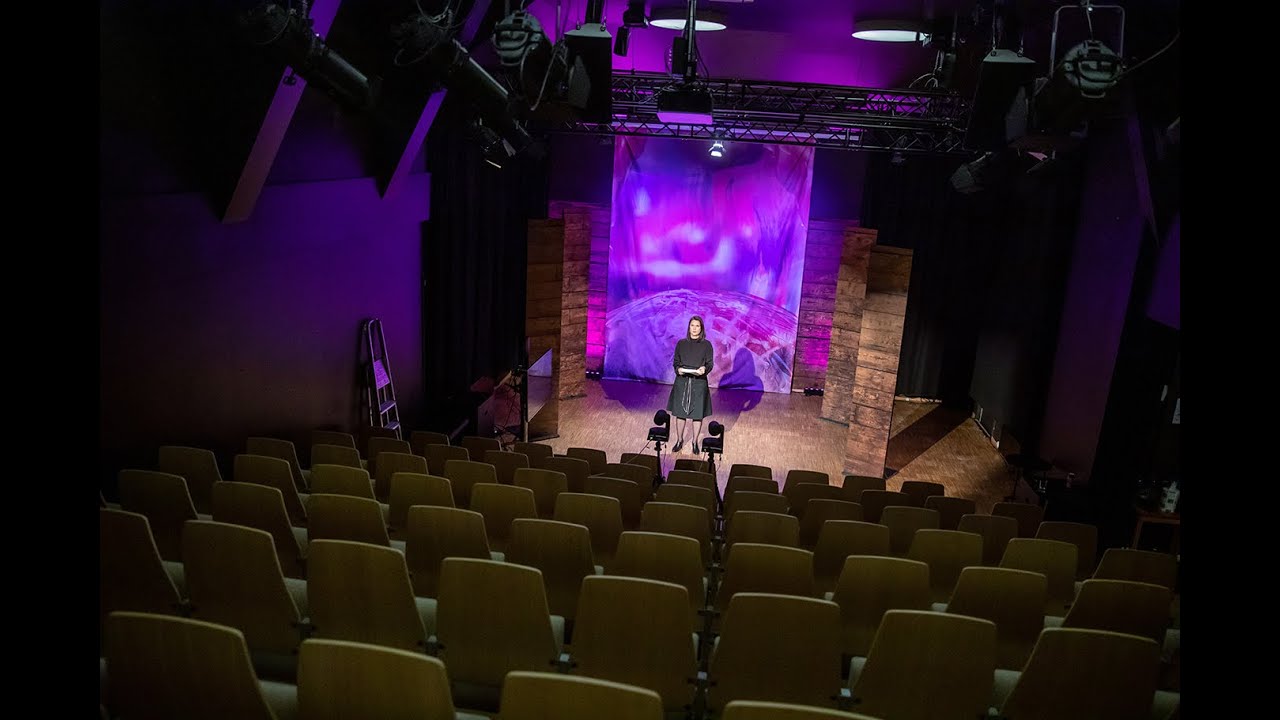 Watch the opening speech from LitFestBergen 2021.